The Value of Money 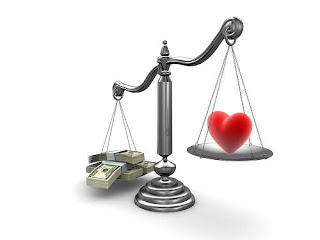 What is the value of the human heart?
I am learning a real lesson about money. It goes like something this. Money is a tool. Okay, I get that. Like my computer, which I am finding I cannot do without. Like water to wash my face and gas to drive my car, money is a tool by which we get things done. So, why then do I allow myself to be devalued by the weight of money, which can never be as valuable as the human heart for social justice, taking care of the Earth and its living inhabitants, helping children to learn peaceful ways to co-exist? I'm having to ask myself this question. I don't like the answer.
The last few years, I put my time, energy and yes, my money, into a show called "The Peace Hour" and the "Think Peace Radio Network" in Houston. I had a good following and good broadcasts. I have to admit, both were incredible ideas borne out of the need to share what its meant to build cultures of peace, justice and healing. The Peace Hour is my baby! I loved talking with people from the Children's Defense Fund or young people about the Obama phenomenon. We had a spirited debate about religion when writer Robert Jensen was branded a heretic and asked to leave a church (not by the congregants or the pastor, by the way) and we talked about nonviolence in all of its forms. One of my favorite interviews was with Willard Wiggins, an artist who sculpts really, really -- I mean, REALLY small objects. They could be placed on the head of a pin. Another of my favorite interviews was with Reed Gandhour, a then 14-year old who had interviewed one of the Muslim founders of UMMA Clinic in Los Angeles. Leaving the microphone on, Reed and I talked candidly about being a Muslim American child and being vilified by association with Muslim terrorists of '9/11'. She said, "They supersize the bad stuff and pay no attention to the good stuff." Good stuff like her family members and the love and joy they shared. I will always remember the young Jewish woman from Israel and the young Muslim man from Palestine, sharing their work--hers with Iranian penpals, his in London on religious dialogue.
Yes, I remember these stories and then I remember why I'm not doing it on a regular basis anymore. Money. But, I also know now that it is my fault--not the fault of others. When a person doesn't get the support and backing of his or her community, there is only one thing to do--expand the community to include people who do care and who do share the passion and goals of those brilliant ideas that DO and WILL make a difference in the world. Just in case one didn't know, I was told that my show lacked quality sound--not quality programming. No one could find fault with that. But, how easy would it have been to help solve the problem? Very. Better equipment. It could have been fixed, but the value of the show wasn't appreciated enough. I left, but it left a sour taste in my mouth and a scar on my heart.
My friend Ardey declares that she forgives every person, place or thing that needs forgiving, including herself. It's a great mantra, because instead of being hurt that people didn't share in my dreams, I just have to remember that there are those who will and do. I may not have met them yet, but we're gonna meet each other soon. Those that I have met, we're working on it. And I also know that it isn't about money, it's about putting the emphasis on love and placing it on the scale of justice and recognizing that money will never be more than a tool. I also have to realize something else. Money should never stop us from accomplishing our dreams and passions, but that we must learn how to use other valuable techniques and tools to get around the money issue--like my blogs. So, look out world. Money won't stop me, but I will make money to continue the work. I'm just going to focus on what I do well and keep doing it.
The Peace Hour starts again on September 11, 2010 on Blog Talk Radio. Think Peace Media and Communications has taken over the idea of the Think Peace Radio Network for young people, also to be heard on September 11, 2010. We're also looking to get a Think Peace van to travel around the United States gathering the stories of peace in action--something I'm good at and have been doing for six years. Oh, and if you like the idea about the work that we're doing, send a donation to Think Peace Media and Communications Network, 1408 Creekside, Apt. 3, Walnut Creek, CA 94596-5523. Your gift will be and is appreciated.

For more information visit the Think Peace Media and Communications blog and get ready for The Witch and the Preacher's Kid, to also debut in September 2010.