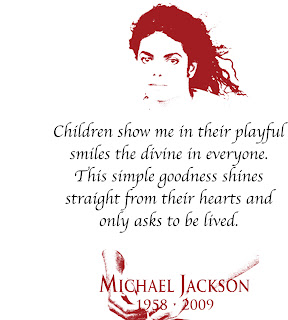 I personally miss Michael Jackson although I didn't plan to. I found myself a little startled at his death, not expecting it. I also found myself quite sad. I grew up with Michael and he was the same age as my brother who looked remarkably like him before he changed his looks so many times. With all the news about him, I was a little tired of seeing his face in the news because it seemed to always coincide with scandal. Yet, like a lot of women, I could believe that he was strange and even a little damaged, but never dangerous, especially to children. Yet, I don't know. I couldn't know. He was far out of my reach and so, I turned my back on him, but never his music. I did my best to separate the Michael of the tabloids from the Michael whose music always will and still touches my soul.
As we end this current year and head into the last year of the decade of this new millennium, I believe that music may well be our salvation. Of course, as a peacemaker who happens to be just a little off, I could be wrong. That's the thing about being a peacemaker, we are perpetually questing for peace. Still, today, the day after the Christmas, the first day of Kwaanza--Umoja--makes me think of ways in which we have unity. Music is unifying. Take Michael's We are the World and then one of his best (one of my favorites), Heal the World. We believe. We have hope. We have faith, that we can make this a better world. But, if we can feel it in a song, we have to understand that we can't separate it from who we are as well as who we are becoming. Evolution. Who are we becoming?
All this wrangling among ourselves. Everyone has an idea on how we can make this peace happen in our crazy world and I have to say, why don't we must make some crazy peace every chance we get and be done with it. Let's not separate ourselves into bits and pieces, but take the whole of our evolution to come to terms with the good, the bad and often the ugly. Now, this wacky peacemaking blog is beginning to sound a little maudlin and I can't let that happen. I have to make what I say sting a bit, but I also want to soothe and perhaps even make you laugh a little, too. Still, laughter and tears are a good indication of our growth. Nothing is ever so black and white after all.
There's a Biblical adage that we should become like little children. In that, perhaps, Michael sometimes took it a bit too far. He was ever the child because part of his childhood was taken from him. Still, he had a brilliant mind for music, which is anything but child's play. He could take a song and make it touch the core of each person. No one will ever be able to take that from him. He could lose himself in the creativity of song and dance and we are mesmerized still. He did that, despite what we may say or not say about him.
So, what's the point of this particular blog. Christmas Eve, I heard for the first time a Rev. Deb at Inner Light Ministries in Soquel, California, say that she couldn't worry about what people might say or not say about her. Her concern was the need to say it, live it and be it, the peace she wants to see in the world. Well, that's the point, isn't it. You can't do this for anyone else. Crazy peace means doing what you do, the best you can do it and whenever you can do it. Don't worry if it sounds right, even ramblings of a blog, but ramble nonetheless 'cuz craziness is its own reward. If you feel it--the peace that is--share it. Otherwise, there's nothing out there to remember you by. Keep the music in your heart and soul and don't sweat the small stuff, but don't stop making the music of peace. 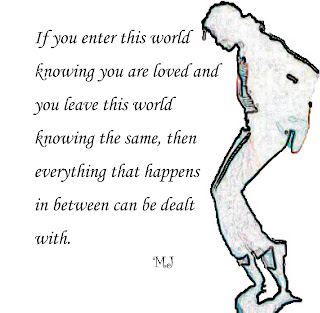