Peacemaking Is Not for Sissies 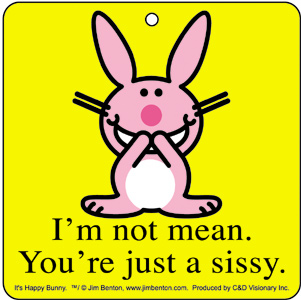 What is a Sissy, Anyway?
It is 2011, a month gone, and never before have I felt the need to explain the whole idea about what peacemaking is all about. True, there are things we want to change. We want to end poverty and war-mongering-type solutions to our problems between each other and nations. We want a green earth and a healthy society. True, there is nothing wrong with wanting these things. In fact, these are honorable goals, but the truth is that we're never gonna get 'em until people realize that peacemaking is not for sissies. It is hard work and requires diligence and commitment.
I've been a sissy for a while. They call me the gentle giant. I tend to want to work things out and I really, really, do my best to keep a handle on my anger. Now the reason I'm so angry is that I want to scream and shout and bring the house down, but have been taught--mostly, that as peacemakers, we're supposed to be compassionate, nurturing and nonviolent. So, I've said it before and I'll say it again, "There is not one scripture, secret code, text or other thing that says, 'Thou shall not be angry.'" Sin not. I get that one. Don't let the sun go down on your wrath. That one, too. Not get angry? Well, I'm losing that battle.
Why, then am I so pissed off? Some of it is what I said above. We are not ending poverty and war-mongering is not a foregone conclusion. Our earth is actually pissed off these days and Mother Nature is no joke. I got Rheumatoid Arthritis and Lupus--far from healthy--but working on it. Still, insurance is joke these days. It costs too much and no matter how much I pay for it, when I go to the doctor, I get this thing in the mail that says, "oops, sorry, we are only paying this much ..." and so I ask myself, "Just why am I a peacemaker?" I vote. I write my representatives. I am a critical thinker. What's the problem?
I feel unheard, under-represented, and under-appreciated. I complain. I reflect. I get down and then I try and talk myself out of it, saying, "today's another day" and "I'm gonna rethink the possibilities" and then I say, "What's the use" and "Got put my time into other things" --- and that's just sissy talk. I'm not getting my way, ain't happening fast enough and so I'm ready to chuck it out the window, like the proverbial baby's dirty bath water? What? Now I'm a quitter?
Yesterday I was getting ready to ride the train from my job and I assumed that my boss would run me to the station. And just before I got ready to go, I learned that I had made an assumption without asking. She was pissed off, especially realizing that I could not get a cab and all I could think of is how can I leave and not make a fool of myself by bursting into tears (actually, I did cry, but I hid it well). Let me tell you something about being a sissy. Know what I should have said? "Well, of course I assumed you were taking me. You did the last time." While I might have apologized for assuming and I admit that I had, it would have been time to talk about reciprocal attitudes. I wanted to ask, "Why are you so pissed about it?" Instead it hangs there and most of it is me, but clearing the air, keeping it real is real peacemaking power. Again, because it hurt my feelings--I sissy-ed up and it changes things.
Of course, I've turned it over and over in my head and that's just dumb. It's over with. Look for the opening another time. It'll come and I've got to be ready. Truth is that a lot of assumptions go on between most peacemakers these days. When you cover it up, suck it up, you are really sitting on a powder keg that erupts when that person finally does or says something to which I respond, "You really are an idiot." Wrong, wrong, wrong--but mostly these outbursts are based on tiptoeing around the problem and issues to begin with. What did I expect?
Look, if we're gonna work together, we gotta keep it real. We've got to get it and let it go. First, next time I won't take it so personally. I should have said, "My bad. But, really, did I have to ask for a ride? I would have thought you might have asked me, too? You assumed as well as I did." Now, how do you want to handle things in the future? Make an agreement and stick to it. That's peacemaking. And to the woman I called an idiot --- well, I overstepped. Frustrated and not doing the count-to-ten thing I teach the kids. I will say, however, that my next line of 'do what you have to do' stands. I will respond to the accusations you level with truth. You either accept them or we do the next thing and get others involved. But, I promise not to slash and burn--you, that is, but I won't promise you I won't get angry about it. I promise you that I will, however, be fair! Oh, and no name-calling. That's being a sissy, which I don't intend to be anymore.
Peace.