The Past is a Place to Visit 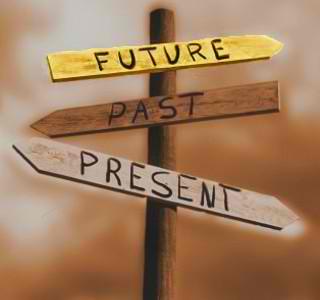 The Past, Present and Future
Once upon a time there was a place that held the past in its present waiting for its future.
One of my writing students wrote about a place. He described it brilliantly. Then he got stuck. Where was this place? What was its time? The grass was green, the breeze was light and yet it was a hot day. A time, yes. And also a place. But, the minute he wrote about it—described it, the present story became the past. The period at the end of the sentence. The Past. But the story? Somewhere between the first word and the last. Lots of periods, though.
Funny thing about the past. Oddly enough it is always there. Its presence is not always consciously acknowledged. In other words, we are not always aware of it and yet its influence is ever present. Get it? In some ways I believe that our past and present are so tightly interwoven that we are locked between them. Which means—there isn’t a clear future, stuck as we are.
Some would say that we can’t move forward until we acknowledge our past, but we do move forward every day. What we don’t do is move past the past. Without a clear understanding it is said that we are doomed to repeat the past and it seems, without fail, we relive the past over and over again.
I am a peacekeeper and it seems that I can be nothing else. I see sorrow and have to address it. I can’t ignore it nor can I dismiss it. However, I do find that I have a somewhat objective stance towards the sorrow in that I have to look at from every aspect, every angle. The sorrow comes from some place and that place is usually rooted in the past.
The problem with trying to understand a particular area of the past is that sometimes you weren’t there. It wasn’t your reality or your story. It was, instead, something that happened and the effects are seen in the present—seven generations out will reap either the benefits or the consequences of that moment.  It pays to know about the past. Like any story, however, the narrator gets to tell it. The thing about stories is that if there is more than one person affected in it, the results become a plethora of stories seen through the lenses of those who were there. Not all get to tell the story either, so the story takes on selective meaning. Therein, says Shakespeare, lies the rub.
I can’t forgive what I don’t understand—or can I? The idea of moving forward requires some peculiar and unusual processes because if truth be told, we just don’t know it all. The past looms over us because the whole story is not told and sometimes lost so as to never be told. But, I don’t believe that—not exactly.
The first time I went to Atlanta I drove. I had my children with me and they were sleep when I past through Mississippi and later through Alabama. As I reached the border of Alabama the sun was coming up. Its rays were extraordinarily subtle—twilight with a touch of color. The rays landed across a lush green valley of trees where kudzu twined up to the sky. I thought it was beautiful, but then an overwhelming sorrow took over. I didn’t just start crying, I was sobbing. Wracking sobs that made me think that my heart would break. I had to pull over because I hadn’t been sad until that moment and yet the grief was overwhelming and I could not stop, nor did I understand why. Frightening. It took until the sun was fully ablaze that my sobs stopped and I could drive again.
What was it?
It was a couple of years later that I understood what happened to me. At some juncture of my drive, I passed through the past. That wonderful and beautiful sight of greenery and a beautiful sunrise that greeted me was also a time when some black woman was finding the charred remains of her husband, brother or son. I believe that at that moment the bloody soil of Alabama spoke to me. I can’t prove it, but I can tell you that I believe it without question. I know because as I learned the stories of that place from people I got to know later that year, it seems that the dry bones did and do cry out.
Did you know that kudzu is a weed and that it literally chokes the life out of other plants? It is beautiful, though. And I know that I can never think of that beautiful plant without feeling the heartbreak of some person grieving and the injustices that never saw the light of day. I can, however, show mercy and now I know when those times come upon me, when I don’t understand or know the story, I can stop and pray, stop and listen/acknowledge that moment, whatever the complete story is and ask for peace on that spot or land.
I now know why those moments come and they have come to me in Brazil, India, S. Korea and the Caribbean and other places as well, that I stop—give over to the spiritual insight that these moments are times for healing. The grief doesn’t overwhelm me anymore because, after all, I took this job of peacekeeping. Those places of the past beckon to us and we should take time to visit them in our present in order to strengthen our future.
Peace.