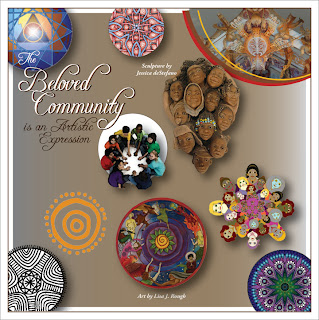 Reflection of The Beloved Community,
An Artistic Expression
Happy New Year. May your next 365 days encompass all that you dream and hope and May Peace Prevail on Earth. Starting Today. Okay, pleasantries out of the way, let's get down to it.

The Shape of Things to Come. I love mandalas. The above poster holds several different mandalas representing the Dream. Different patterns, colors, shapes and sizes, the mandalas are artistic expressions of something vast as well as small. The vastness of The Beloved Community throughout the world and the smallness of each one of us creating and participating in its creation. Some might look at this and say, well, they aren't all mandalas, but I believe they are. The definition most associated with mandalas is that they are geometric figures that represent the universe. I like that, but I also LOVE the idea that mandalas represent symbols in our dreams. Our Dreams. Dr. King's I Have A Dream speech is symbolic to many who have felt disenfranchised or have an injustice served upon them or those they love. By the time Dr. King gave that speech, he espoused nonviolence as the only way to get to that dream. When Dr. King went to India to learn more about nonviolence,  as a way to achieve victory for the cause of Blacks in America, a mandala of flowers was laid for him when he arrived. Several floral mandalas have be laid for him after his death in honor of his sacrifice. All in all, mandalas represent both nonviolence and peace, for peace can best be achieved through nonviolence.

So, each year I take the day before the New Year and the New Year itself to give people my best wishes and then I take a moment to reflect and make a few new year resolutions. That's all well and good, but do I have to throw away all that happened in the year before to achieve what is needed in the new year? I hope not. T.S. Eliot's poem Little Gidding is part of a 4-part series written during war time. As with a lot of us, we look at what was wrong with the year (or years) before vowing that things will be different. I say it every year as the last 8 years have been quite difficult. I hope to refine each new year, but don't always know how. Am I using the language of years gone by, that didn't work then and don't work now, to move into this new time? Yes, I have and do. Today, I end it. No more.
You see, I forgot the rest of Eliot's lesson from his professing ghost  where he continues the conversation with, "we must go through a refining fire, where you must move in measure, like a dancer." And so, at the end of the year I started collecting mandalas. Painstakingly, I started redefining mandalas as not just your average geometric symbols, but further--the face, the movement of color and light, finding a sculpture and a painting that represented symbols, and then placing them all together so that one must look, not at one, but all. Not at the same time, but one at a time, and then step back and there they are--together. Eliot's poems do that. He explores images of "great beauty and haunting power of his own past, the past of the human race, and the meaning of human history." This exploration was done on a daily basis and so shall ours. While the New Year symbolizes much for each of us, it should be part of a daily exercise of exploring the world in which we live in order to achieve the Beloved Community. Not a utopian place, devoid of conflict, but a place of utopian (beautiful and haunting) ideas on how we can achieve that place in every segment of society.
So, today I think of this passage of time as another opportunity for the new and exciting. I'm not starting fresh, I'm freshening and polishing up my act, finishing those things I have started. I'm throwing off the shackles of shame and despair and recognizing my fallibility without beating myself up about it. I'm fixing things, throwing other things away (recycling if I can), and I'm putting on my dancing shoes each day as I dance through life IN the BELOVED COMMUNITY that is already here. Hear the music? Dance with me.

Design by
P K and Company