When to Speak and When to Shut Up!

Silence is golden, but my eyes still see

Silence is golden, golden, but my eyes still see

From the song, Silence is Golden 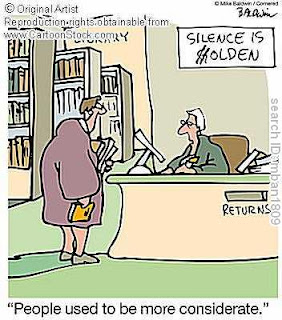 Remember the song, Silence Is Golden, sung by FrankieValli? The song is about a guy struggling with whether to tell a girl he likes that the guy she's involved with is scum! The song takes to task the philosophical bent that "silence is golden?" Is it? I wouldn't know. The older I get, the harder it is to keep my mouth shut. Perhaps that is the problem with getting older. We don't have much time to waste, so it's better to say it than to swallow it. Let's see. Tell the doctor what really hurts or beat around the bush? Hmmmm. Tell him. I remember that my grandmother never wasted words or time. "That's just foolishness," she might tell me when I complain about my job or something else that bugs me. Do what you think is right, she would tell me and that was that. Still, as I study communications, I realize that most of the theories about communication have more to do with the observation of others than actual experience. It's easy to judge what others are thinking or doing in a somewhat sterile environment (sterile meaning any environment outside your own), than to actually risk your own vulnerability to understand from the inside what it means to communicate. Yet, I do understand the reluctance to do so since risking yourself for the sake of social science can be dangerous. You have to actually evaluate yourself and most of us don't want to do that. I'm sure of it. Because if we did, we'd have to acknowledge that we muck things up with our involvement.

My daughter is upset. She wants to move away to another school. Hey, how about another town? She is sad. Her friends are horrible. The teachers suck and if she could start over, it would be okay. I have to explain to her that it would if she wasn't taking her with her. Huh? We can't fix anything until we work on ourselves. Then perhaps at least part of the problem would be fixed. 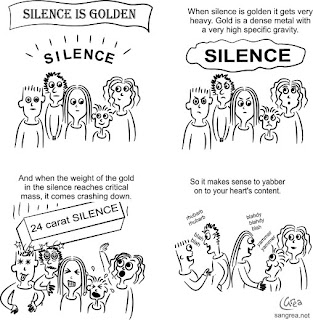 Right off the bat, I am going to disagree with the notion that silence is golden except when you're having an argument with yourself. Then you might want to shut up and listen to that inner voice that is trying to tell you  something. Sometimes we spend so much time arguing with ourselves about the right way to handle a situation that we don't take time to listen. I argue with myself and usually lose because I am not sure which side I am on. To speak or not to speak, I assume that is the question. Right? Right!

Still, that's only one half of the equation in communication. I have to argue with myself and then try it out on you, too. That's pressure. I want to be able to make sure I am making sense (hence, first conversations with myself) and then you come and mess up my flow after practicing so hard. If we can't solve the problem, then I have go back to the drawing board. But, as the older mama here, I am going to take a stab at this and say that when waiting for the other shoe to fall, we should check our feet prior to there being a problem. Okay, poor analogy. Silence works during reflection. With communication, even if you're not saying anything when you should, the look on your face, your stance, the raising of your eyebrows ... far from golden. Those things speak volumes. Communication is more complicated than we realize.

So, what are we talking about? Conflicts. Seems to be the task before us. How do we communicate in a way that lessens conflict? Do we not talk about it because it might cause a conflict? Are there rules of engagement as some call conflicts? So many unanswered questions and as I try to make some sense to incite a conversation, I recognize that there are more questions than answers because we are still working it out. So, when the guy asks the question of whether he should share some disturbing news with someone he cares about, my question is "what is his motivation?" To save her. To enlighten her? To make himself the better choice? To let her know she has a choice? When I have the compunction to speak, that somehow if I don't speak, something ghastly will occur, I am moved to ask myself if it will make a difference. Will I be heard? Will I be heard in a way that moves us forward or takes us back?

My grandson comes to visit and while his Dad (my son) and I are talking, he is itching to interrupt. "Excuse me, excuse me," he says as he prances around us. "Grammie, Grammie," he pleads. "I have something to tell you." Finally, relenting, I bend to hear what he has to say.

"I'm .... ummmm." He gropes for something to say, finally muttering something to fill the void. I realize then that while he didn't really have anything to say, he did. He wanted to say this. Pay attention to me. Make me feel important. See me and let me know you care.

I do. And I did. Maybe the whole idea about conflict is not always the resolution, but finding ways to make sure that we are as important to the other as they'd like to be. As we'd like to be to them.