He's Mine and Tomorrow's, Too 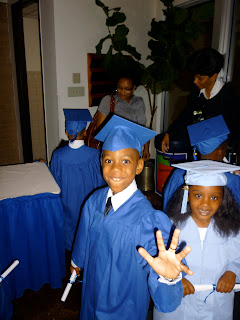 Owning Now and Not the Future
Give me a day with a bunch of five and six year olds and I can see tomorrow from my front row seat. He's my grandson. His name is Taliek. I loved him the moment I knew he was coming to this planet from wherever children come from. I am not one of those who believes that children begin at conception. In fact, not willing to be part of the debate of when life begins, I will just say that I believe that we exist before we were ever joined by egg and sperm. And we don't end just because the heart and brain stop either. What is life? After all, on this day in May, after traveling from California back to Texas, I wanted to stay with him. I don't want to miss anything. Of course, I will--miss a lot, you know.
My grandson graduated from kindergarten this past May. It should have been a joyous time and for me it was. For him? Absolutely. Look at that face. Those large hands like his father's. His eyes? Mine. Humor? A combination of all of us, but truly his own. At least it will be. Right now, we get in the way of his development with the fact that we're in charge. In truth, we think we own him. My grandson.  My son or My nephew. We claim him because we like to collect things--people, but he isn't just ours. He's tomorrow's, too.
Tomorrow is his and as Khalil Gibran has said, "His dreams live in the house of tomorrow" and we can't go there. At least not all the way there. Someone said he looked presidential. In this picture, however, he looks like ours. He did this. He made the good grades. He sometimes talked too much in class. He troubles his bottom lip like his father does. I see yesterday in his face. His father is my first born after all. But, I see only a mist of him in tomorrow's light. Not quite fully formed and yet, I see his potential--most of it my hope. How can I know what is mine and what is his?
Right now, things are tough. I wish we would think of his future when we make the decisions that we do. I told him that I would come and get him this summer and if his parents were good, I might bring them, too. I may not be able to go all the way into his tomorrow, but I promise you, Taliek, that I will walk with you as far as I can.
I love you. Grammie.