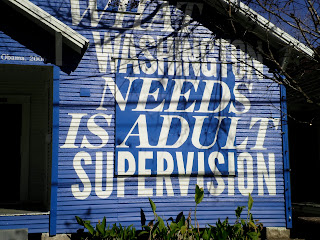 Yes, they do!
The last few months, we have seen so much pontificating and grandstanding that I thought I was in a 1950s revival led by snake oil salesmen. And, yes, it was mostly the men--but there were a few women (can you say Michelle B.) who tried to make us believe that they actually care about Americans. Instead, they, along with Fix News and their lineup of No News anchors and talk show hosts, show us that it is time for some adult supervision in Washington. That means, fellow Americans, that we must step up to the plate and DEMAND that they stop acting like spoiled children, wanting their way and throwing those political proverbial tantrums that continue to put us all at risk. And--that if they don't, we will send them home! It means that we must stop letting them divide us along racial, political, and social lines. Okay, I'm a liberal, mostly moderate but other times flaming, and you may be a conservative, sometimes unrelentingly so--but we can agree that our country is in trouble, that we need jobs and that it is not the fault of this President, but that we all must step up to the plate and take some responsibility.
I want to talk about the deal that was made on yesterday. I wasn't happy with it--no one was, but sometimes we don't get exactly what we want. However, we can do something different than we've done before. We can stop pointing the fingers across the aisles of our political leanings and think like citizens of one Nation. We can cease this talk of civil war and find ways--there are many of them--to lead instead of being led. We can stop preaching our rhetoric to the choir (those who agree with us) and figure out ways in which we can dialogue across those areas of discontent. We are grownups after all and if we aren't, we should grow up!
We cannot change the fact that we spent money that we did not have for two ill-advised wars, and we cannot undo the decisions we have already made. We can however, rethink our decisions concerning Libya, for instance. We have time to stop and think and not make it as costly or time consuming by putting the brakes on now--but that's for another blog. We can look at what it will take to make a healthier and more prosperous America and utilize our resourcefulness to think outside the proverbial box and get busy using our creativity and ingenuity. We can insist that these guys keep their commitments to ALL Americans and not the select few that help them continue to support corporate greed and avarice, trying to fool us into thinking that the "rich" are job creators. We have to stop buying into the rhetoric and be a little like Don Lemon of CNN, who got tired of having our politicians, across all political spheres--Democrats, Republicans, Tea Partyers and others,  respond to questions with talking points, instead of with the truth and candor. They can't help it though, because they quit talking straight many moons ago. It is the quip, the one-liners that stir people's passion instead of hard hitting straight talk. Just once I would like to see a politician NOT defend his view, but candidly assess his or her own culpability in the current situation we find ourselves in.
I believe the President did and does that. From the very beginning of his term, he wanted to work together. But truth is he came in at the end of an era. His first term started at the bottom of the ninth, with two outs and him up to bat. He's not gotten a hit, not really, because the throws have been high and outside. There are those who would rather not put it across the plate because Obama might just hit is out of the park! Okay, I'm not that good with sports metaphors, but it just seems that Obama came in with the deck stacked against him. Before anyone thinks we should give Obama a pass, we should not. He signed up for this and we have a right to analyze, but we should also serve by not taking sides, but urging all of our politicians to do what is right and stop pitting us against each other. Perhaps if the American people would cross the aisles themselves, we could be a force to be reckoned in. If don't do that, we all will lose.