Be Afraid? I Think Not! 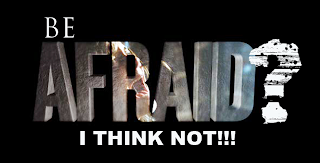 Today I received a message from the Obama campaign. Now before you read any further, know that I AM voting for the President to be re-elected. Know that I think he is the best man STILL for the job and that I UNDERSTAND that we have some challenges ahead of us. But, lately, I've been really, really, REALLY! upset with some of the campaign literature I've been receiving.

That was the subject line in the email I received this morning from the Obama campaign machine. The email went on to say that the bad news is that the Romney campaign raised more money than we did. I'm going to agree with my friend who today told me her new response to statements such as this is--SO?

SO? They are raising a lot of money. Hey, the Koch Brothers have deep pockets and they are determined that they will buy what they choose. Guess what? They can't. Some things cannot be bought and it is my belief that this election is one of them. Money won't buy a brain and the things that comes out of mouths of idiots will be their undoing. Case in point:

One donor was quoted as saying, "I don't think the common person is getting it ... they don't understand what's going on." Interpretation: These people aren't buying our million dollar ads not because they aren't buying it, but because they are ignorant and uneducated. This person went on to say, "I just think if you're lower income -- one, you're not as educated, two, they don't understand how it works. This is the kind of thinking that we're up against in this election." Say what?

What are we really afraid of? That they are raising more money? Well, it seems that if they are raising so much money, they'd create ads that people would understand, right? Or buy into, okay. No, see that's the wrong way to look at it. It isn't that those poor, uneducated people don't know how it works or that they don't understand english. Instead, we need to have a little faith in the American people to sift through the utter feces-driven rhetoric and not buy it. No matter how they cover it up, it smells and when its all said and done--feces is feces!

Moreover, can they really think that insulting the America people is going to make them go, "Wow, I don't know nutin' 'bout birthin' no babies, so I guess I just gonna go and do what they say." Poor doesn't mean dumb. And hungry doesn't mean desperate. And so, I say to the Obama folks--stop sounding desperate. The later email I received notified me about the quote from the donor. That is the right message. Show us who they are. Show us who they think we are, too. And on election day, you will have informed people who understand about the real issues of this race. It's about people. Period.

Come on guys, get with the program. Give us information and keep giving us truth and integrity, something that money CANNOT buy.

I'm P.K. McCary and I approve this message. President Obama--so should you!