Be Careful of False Advertising 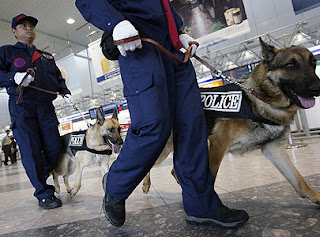 I've had it happen to me before.
"Ma'am, could you come with me?"
"Of course," I always say when asked to join security at the airport. I'm not afraid because after all, they randomly pick people and go through their bags. Something may have showed up on the screen. I know the drill. I have plenty of equipment and sometimes those cords look menacing. So, I gladly go.
He offered me a chair to sit down, but I was in a hurry and so I declined. I noticed that he seemed uncomfortable for some reason as he put on rubber gloves, asked my permission to go through my backpack and started the search. Still not worried. Until ...
Sniffing at my back leg was a police dog. He was promptly guided to my backpack. It wasn't that the dog looked or seemed unfriendly, but 'what the hey?' Dogs. Bomb detectors. This was serious. As the security guard went through my bag, this beautiful animal walked around the bag for a moment and then promptly sat on his hunches. Whew! Nothing there. I mean, I knew nothing was there, but still.
I later found out why the security guard was so uncomfortable. I had a book in my bag, but in the zipper portion was my external hard drive (very slim, about 5"x3") with the cords around it. Placed oddly enough against the book, on the screen it looked like an explosive device. More than that, my Mac which was in a container on the conveyor belt, had stickers that read, "May Peace Prevail on Earth," and "No Hate Spoken Here," to name a few. I didn't look like a terrorists, but you can never tell.
The security guard said that it was uncomfortable for him because if terrorists started looking like peacemakers (which he said I definitely looked the part), they were in trouble! Of course, I'm 6'3" and my boys are taller than I am. I've always told them they could never pull of a crime because they could definitely be picked out of a lineup. So, I do my best to convey the gentle giant persona. Most of the time this is true, but there are moments ... Well, needless to say, I was grateful I wasn't a terrorist and grateful that all that was in my bag was an external hard drive. But my life did flash before me! I mean, everything I've written, designed, etc., was on that drive. I'm just glad that despite the evidence that my bag could have contained an explosive device, the young guy was quite steady and kind with my things. I mean, I could tell he was sort of nervous. With the December incident still in his mind, everybody seemed to be on pins and needles. I could feel it even though I knew I had nothing to worry about, the tension was palpable.
But, what I really noticed was that even though there was that tense moment of the unknown, the young man never stopped being kind (even when I refused a seat), he never gave me that askance look that says, "You're in trouble!" His hands shook, though. He dropped the little wipe twice. But, he was kind. Even the guy with the dog was kind. They apologized profusely, too. They didn't want me to be a terrorist.
I guess that makes them peacemakers, too.